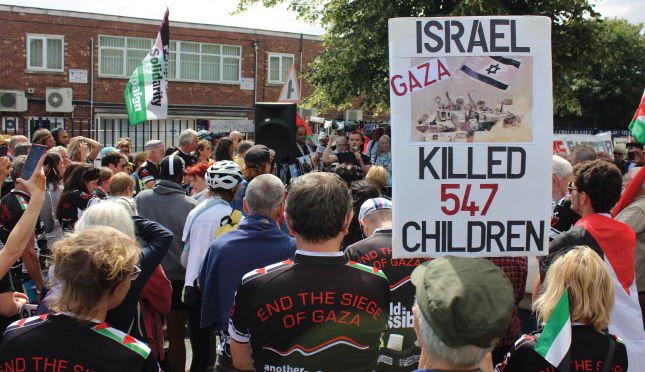 Manchester PSC will be participating in the national week of action. On Saturday 1st July we will be holding a protest outside the HSBC branch in St Anne’s Square. On Monday 3rd July there will be a protest outside the Elbit factory in Oldham (Ferranti Technologies Waterhead) and on Thursday 6th we are organising a coach to the protest at the Elbit/UAV  factory in Shenstone outside Birmingham.Palestinian civil society has called for a comprehensive military embargo on Israel. Now is the time to heed the call for effective solidarity.The UK and Israel have a close and profitable military relationship. The UK government provides Israel with military and political support to continue with its repression of Palestinians and acts as a green light to further war crimes.

The UK is home to a number of arms factories that export weapons to Israel including four Elbit Systems factories: UAV systems in Shenstone; Instro Precison in Broadstairs, Ferranti in Oldham and Elite KL in Tamworth. Elbit Systems markets its weapons as ‘field-tested’ on Palestinian. UK based banks, like HSBC, hold shares and provide loans to military and technology companies that sell weapons and equipment to Israel. HSBC’s complicity includes Elbit shares worth £3.64m