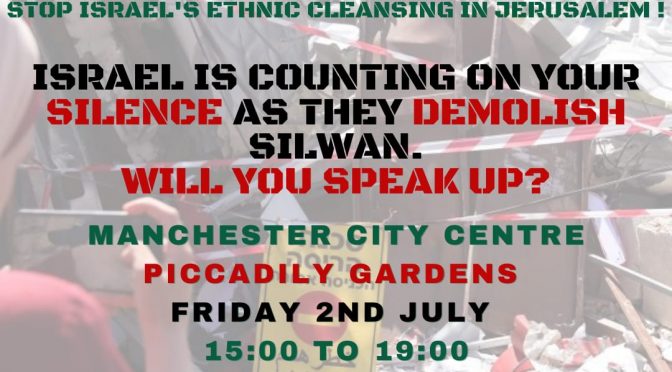 Save Silwan!! Save Sheikh Jarrah!!

Israel has begun demolishing Palestinian structures in the Silwan area of illegally occupied east Jerusalem. Sixteen families and more than 100 buildings housing over 1,500 people in the al-Bustan area of Silwan in occupied East Jerusalem face imminent demolition. Palestinians are being pushed out to make way for an Israeli theme park. A further 4000 Palestinians are facing the threat of eviction or home demolitions across Jerusalem.

Palestinian residents attempting to save their community have been met with brutal violence from Israeli security forces and neo-facist settler groups. This is part of Israel’s demographic manipulation of Jerusalem to remove Palestinians, and is a clear example of systematic ethnic cleansing.

The demolitions are beginning and the world must act.What is happening in Silwan and Sheikh Jarrah are high profile cases at the moment, but are by no means unique. Israel has demonstrated it will continue expanding illegal settlements and undermining peace for as long as there are no real consequences. Human Rights Watch have recently declared Israel to be guilty of the very serious crimes of apartheid and persecution. The UK has an obligation to uphold international law, which includes holding Israel meaningfully accountable for these crimes.

Our politicians are shamefully silent but we must not be. Join the worldwide protest against the ethnic cleansing of Jerusalem by Israel’s apartheid state. Bring flags, placards, your voices and your solidarity.