RIDE FOR JUSTICE FOR THE PALESTINIANS! –  PROTEST AGAINST THE SIEGE OF GAZA!

This year’s Big Ride is a three days EVENT from Liverpool to Sheffield via Manchester and Bradford. It is raising money for sports equipment for the rehabilitation of children in Gaza as part of a project with the Middle East Children’s Alliance and Dr Mona El-Farra, Vive President of the Red Cresent in Gaza.  The Big Ride will be marking the third anniversary of Israel’s bombardment of Gaza in 2014, which killed 2,205 Palestinians including 547 children. This year is also the 50th anniversary of Israel’s military occupation of the West Bank and Gaza in 1967 and the 100th anniversary of the Balfour Declaration .  The route is as follows.   On  Friday, 4th  August, we ride from  Liverpool to Manchester; on Saturday we continue from Manchester over to Bradford; and on Sunday 6th the final stage is from Bradford to Sheffield.

You  can ride all or part of the way with prices ranging from £30 up to £75 including a Big Ride cycle top. For more information go to the Big Ride website  e-mail thebigride@redspokes.co.uk. 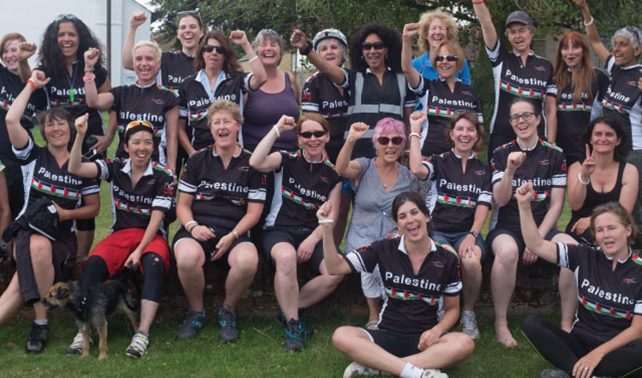 The Big Ride was initiated in 2015 by supporters of the Palestinian people, combining a love of cycling with practical solidarity and awareness raising. In 2015 we rode from Edinburgh to London.  Over 200 riders were involved with almost 100 completing the whole ride. In 2016 four rides, starting from Bristol, Manchester, Sheffield  and London converged on Shenstone near Birmingham, where the Israel Arms Manufacture Elbit makes engines for the military drone aircraft used to attack Gaza in 2014 are manufactured. The Big Ride has raised almost £100,000 for the Middle East Children’s Alliance projects in Gaza.

Don’t be put off by  the pro-Israeli lobby’s attempt to silence those standing up for the human rights of Palestinians. Show your solidarity by joining or supporting The Big Ride.

For more information go to the Big Ride website  e-mail thebigride@redspokes.co.uk. If you give your contact number, we will ring back.