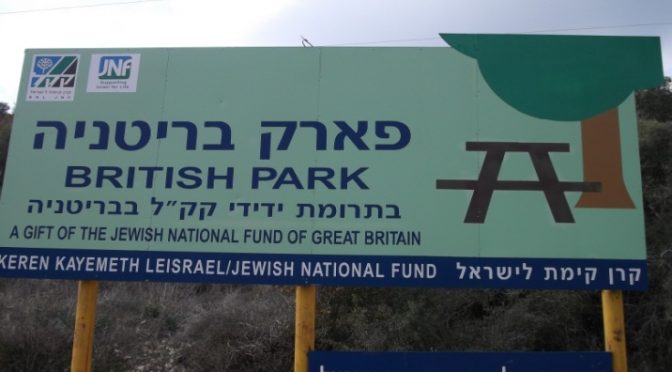 Picture above: Sign for JNF UK funded British Park built on the ruins of Palestinian villages ethnically cleansed in 1948.

In 2018, Kholoud al Ajarma appealed to the Charity Commission that the JNF UK should not be recognised as a charitable organisation as the JNF funded British Park is built on her family’s village, Ajjur.  Her family still have the title deeds to their land in Ajjur. The Charity Commission rejected her claim.

At an independent tribunal, Kholoud will be challenging the Charity Commission’s refusal to end the JNF’s charitable status that entitles the JNF to receive UK tax relief. Her appeal is supported by the Palestine Solidarity Campaign (PSC).

Come and hear the case for de-registration of the JNF UK .

The meeting is part of a PSC national speaking tour in support of those challenging the JNF’s charitable status.

Biography Kholoud al Ajarma belongs to one of the families ethnically cleansed from Ajjur in 1948. Today, they live in Aida Refugee Camp, Bethlehem, only about 25 miles from their village.   The family still have the title deeds to their land in Ajjur.  Kholoud has studied in England, Holland, Norway and Morocco, but says the Right of Return is the real work of her life.

Background  The Jewish National Fund (JNF), set up in 1901, has played a key role in systematically taking over the land of the Palestinian people. Before the Nakba of 1948, Palestine’s Arab population owned 93% of the land on which the state of Israel was set up.  During the Nakba,  two-thirds of the Palestinian population were driven from their homes and  their land seized, much of which  was transferred to the Jewish National Fund. Once land is in the ownership of the JNF it cannot be sold to Palestinians. Today, Palestinians owns just 3%.

As registered British charity, the JNF UK receives all the associated financial and reputational benefits of this status. Funds from JNF UK have been used to further the dispossession of the indigenous people of Palestine. The campaign to persuade the Charity Commission to withdraw the charitable status of the JNF UK began in 2013 and a new appeal was lodged in 2018.

The appeal highlights the case of a Kholoud al Ajarma’s family, whose land in Ajjur was taken from them by force in 1948. No longer accessible to its rightful owners, it is now used a leisure facility for Israelis called the British Park, an example of JNF UK green wash of  Israel’s ethnic cleansing.

More information on the why the JNF-UK should be de-registered available here.