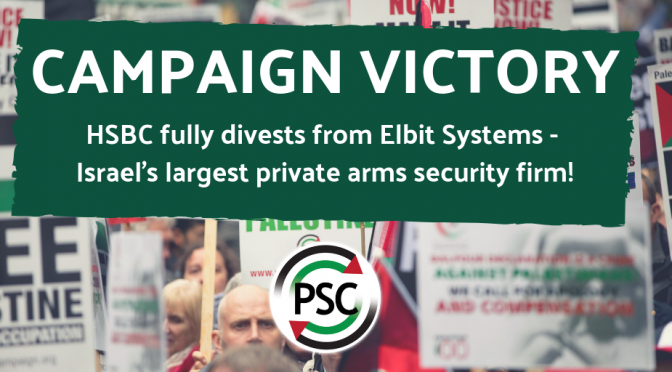 Below is  the press release from PSC regarding HSBC’s divestment from Elbit Systems.

Manchester PSC next public meeting is with Huda Ammori, Palestinian activist and PSC campaigns officer.  Before moving to PSC national office,she was a BDS campaigner at Manchester University.

Join us and hear about the HSBC campaign  and why we need to end support for companies such as Elbit systems, BAE Systems and Caterpillar, complicit in committing war crimes against the Palestinian people.

HSBC confirmed to campaigners that it has fully divested from Israeli drone manufacturer Elbit Systems, which sells weapons to the Israeli military used in attacks on Palestinians.

Over 24,000 people emailed HSBC with concern over its investments in Elbit Systems and other companies selling weapons to Israel’s military, and 40 HSBC branches across the UK were picketed monthly for the same reason.

Campaigners vow to continue the campaign, as HSBC maintains business relations with more than a dozen other companies selling weapons and technology to the Israeli military.

Human rights campaigners have declared a victory as global banking giant HSBC confirmed that it has divested completely from Israeli weapons manufacturer Elbit Systems after a year of campaign pressure.

Elbit Systems is one of Israel’s largest arms manufacturers, notorious for its deadly drones used in attacks on Palestinian civilians, and marketed abroad as ‘combat proven’. The company has also manufactured white phosphorous and artillery systems that can be used for cluster munitions.

Elbit Systems has been excluded from pension and investment funds around the world over the company’s involvement in supplying surveillance systems and other technology to Israel’s Separation Wall and settlements in the West Bank. Elbit has also supplied surveillance technology for use along the U.S.-Mexico’s border.

HSBC’s link with Elbit Systems was first exposed in 2017 in a War on Want report on UK banks’ business dealings with companies selling military technology to Israel. The campaign calling on HSBC to divest from complicit companies received a critical boost when the Palestine Solidarity Campaign and other groups joined, picketing bank branches across the UK over its connections to Elbit and other companies.

HSBC has a ‘Defence Equipment Sector Policy’ which specifies that the bank would not provide financial services to companies involved in the production or selling of cluster munitions. Campaigners pointed out that its involvement with Elbit Systems, even if ‘on behalf of clients’ as the bank long claimed, violated this policy as well as the UN Guiding Principles on Business and Human Rights.

Elbit Systems is rumoured to be on a list currently being compiled by the UN Human Rights Commissioner of companies that are violating international law by providing support for Israel’s illegal settlement enterprise.

“HSBC has taken a positive first step in divesting from Elbit Systems, the notorious manufacturer of drones, chemical weapons, cluster bomb artillery systems, and other technology used in attacks against Palestinian civilians, and to militarise walls and borders around the world. Doing business with companies like Elbit means profiting from violence and human rights violation, which is both immoral and a contravention of international law.”

“However, HSBC continues to do business with over a dozen companies selling military equipment and technology used in human rights violation, including Caterpillar, whose bulldozers are used in demolition of Palestinian homes and properties, and BAE Systems, whose weapons are used in war crimes by Israel, Saudi Arabia, and other repressive regimes.”

“This announcement is proof positive that collective campaigning works. Hundreds of people around the UK, including many PSC members and branches, were involved in pushing HSBC to divest from Elbit through pickets, email campaigns, and other actions designed to pressure the company. HSBC’s announcement demonstrates the effectiveness of Boycott, Divestment, and Sanctions as a tactic against Israel’s continues flouting of international law and human rights. We now call on HSBC to stay true to the principle of ethical investment by cutting links to all companies which support Israel’s military regime.”

– HSBC’s confirmed its decision and informed War on Want and the Palestine Solidarity Campaign via email on 23 December 2018.

– HSBC’s shareholdings in Elbit Systems were first revealed in War on Want’s ‘Deadly Investments’ report in July 2017, and followed up in a letter to the company, detailing Elbit’s complicity in violence and demanding divestment in September 2018.

– For more info on Elbit Systems and exclusion of Elbit by pension and investments funds, see the ‘Investigate’ database.

– For more on the UN Human Rights Commissioner’s list of companies involved in Israel’s illegal settlements, and rumours of Elbit’s appearance on the list, see this article and this updated Q and A on the list.

– Members of the Palestine Solidarity Campaign and other campaigners have held monthly pickets at HSBC branches around the UK, calling for HSBC to divest from Elbit and other companies arming Israel as part of the “Stop Arming Israel” campaign.

– HSBC follows other companies and organisations which have sought to minimise or get rid of ties to war crimes and other violations of Palestinian rights this year, including Airbnb, Quakers in Britain, and Leeds University.