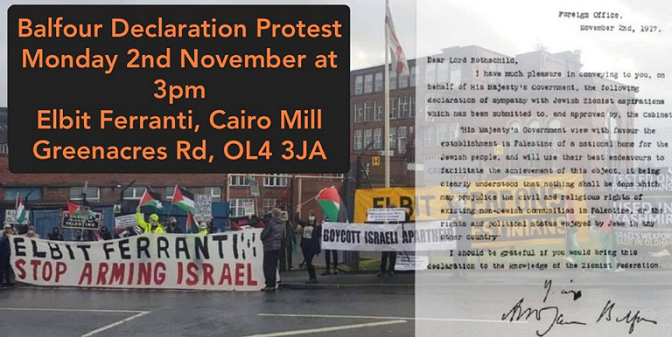 The protest will comply with Covid requirements. all participants are requested to social distance and wear masks as follows:

On the 2nd November 1917, then British Foreign Secretary Arthur Balfour issued a declaration, only 67 words long, that supported the “establishment in Palestine of a national home for the Jewish people”.

It was one nation solemnly promising a second nation the country of a third…… And it was land Britain had no rights over, legal or otherwise.

The Balfour Treaty also stated that “nothing shall be done which may prejudice the civil and religious rights of existing non-Jewish communities in Palestine”. The events of the Nakba, the 1948 expulsion of over 700,000 Palestinian Arabs from their homes, show just how seriously this was taken.

We will be protesting outside Elbit Ferranti, a factory belonging to the biggest private Israeli arms company. Elbit Systems have sold their weapons as “battlefield proven”, which means they have been used in the occupied West Bank or besieged Gaza Strip.

We demand the British Government to #stoparmingisrael.