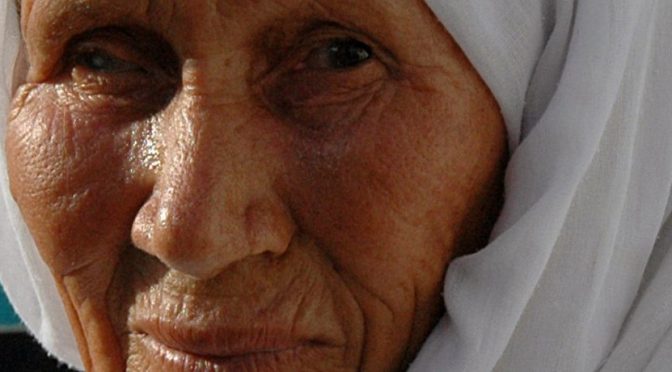 In collaboration with Outside the Frame Arts, HOME presents a reading of acclaimed Palestinian writer Ahmed Masoud’s satirical play, The Shroud Maker which, like Rose, tells a woman’s story of survival through modern history.Hajja Souad, an 80-year old Palestinian woman living on the besieged Gaza Strip, knows how to make business. She has survived decades of wars and oppression through making shrouds for the dead.

A compelling black comedy, The Shroud Maker delves deep into the intimate life of ordinary Palestinians to weave a highly distinctive path through Palestine’s turbulent past and present.

Event: This playreading will be a ollowed by a Q&A with writer Ahmed Masoud.

Ahmed Masoud is the author of the debut novel Vanished – The Mysterious Disappearance of Mustafa Ouda. Ahmed is a writer and director who grew up in Palestine and moved to the UK in 2002. His theatre credits includeThe Shroud Maker (London 2015), Walaa, Loyalty (London 2014, funded by Arts Council England), Go to Gaza, Drink the Sea (London and Edinburgh 2009) and Escape from Gaza (BBC Radio 4, 2011) . Ahmed is the founder of Al Zaytouna Dance Theatre (2005) where he wrote and directed several productions in London, with subsequent European Tours. After finishing his PhD research, Ahmed published many journals and articles including a chapter in Britain and the Muslim World: A historical Perspective (Cambridge Scholars Publishing, 2011). An earlier version of Vanished won the Muslim Writers Awards (London 2011 supported by Penguin Books).