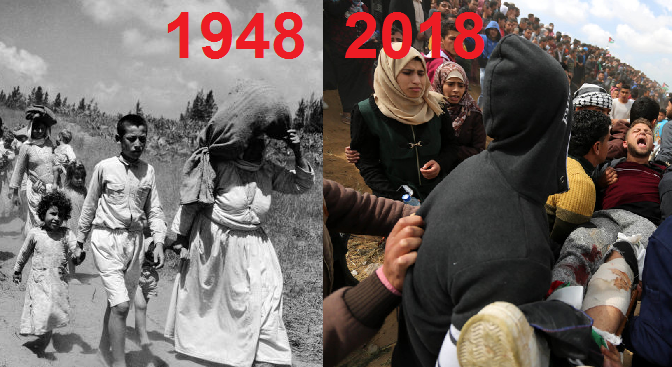 Event to Commemorate the 70th Anniversary of the Palestinian Nakba.

Join Us and Show your Solidarity with the Palestinian People !!!

2018 is the 70th anniversary of the Nakba, when over 750,000 Palestinian were uprooted and forced to flee their homes driven out by Zionist militias during the creation of the state of Israel.

In recent weeks, thousands of Palestinians have been
congregating in Gaza each Friday to take part in a series of protests
called “The Great Return March”. The Israeli government have
reacted to unarmed demonstrators with violence, issuing orders for
live ammunition to be used. As of the 29th April, 46  Palestinians have been killed and more than 5,000 injured. The protests, called by a broad spectrum of Palestinian civil society organisations, have two main demands.

Reaffirm the right of return
International law declares Palestinian refugees have the right to return to the homes from which they were forcibly expelled in 1948 and in 1967. Seventy percent of Gaza’s population are recognised by the UN as refugees. The right of Palestinian refugees and their descendants to return to home  is enshrined in international law.  In December 1948 the UN General Assembly adopted Resolution 194, which called for the return of Palestinian refugees to their homes. In June 1967, the UN Security Council passed Resolution 237 called on Israel to facilitate the return of refugees. These resolutions are still in force.

Bring an end to the decade long Israeli imposed siege of Gaza
Ten years of illegal blockade have isolated Gaza from the world and triggered major socio-economic and health crises. 80% of the population are dependent on humanitarian aid to survive, and 42% of essential medicines are currently at zero stock. The UN warns Gaza will be uninhabitable by 2020 unless urgent action is taken. As it stands, 97% of the water is not safe for consumption and there are electrical blackouts for around 16 hours each day.

Join Us and Show your Solidarity with the Palestinian People!!