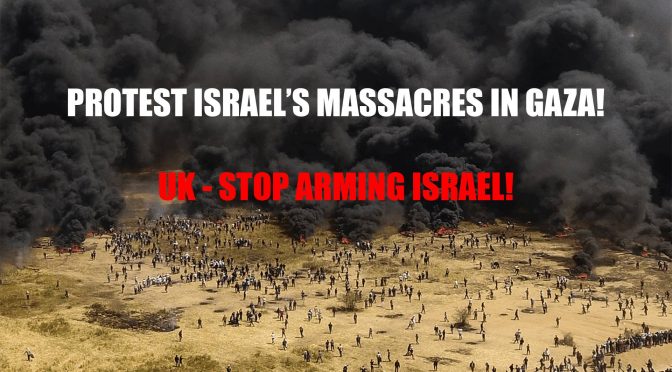 Over the past two months, more than 120 Palestinians have been killed. Razan Al-Najjar, a 21-year-old Palestinian nurse, was shot dead by Israel whilst attempting to assist an injured Palestinian protestor. This is Israel’s latest war crime and for every victim of Israel’s war crimes, we will protest for an end of all complicity with Israel’s apartheid regime.

Palestinians have been mobilising for the Great Return March to protest the ongoing occupation and siege of Gaza and despite Israel’s brutal massacre, they have remained resilient and determined to protest their oppressors and plan to continue to protest for their freedom.

More than 120 Palestinians in Gaza have been murdered and 1000s shot and injured since the Great Return March began on 31st March – and still they go out, unarmed to face the Israeli snipers, jeeps, drones and tanks shooting them at the Gaza border. The least we can do is stand with them.

We will keep marching in Manchester and continue to oppose all UK companies and organisations complicit in Israel’s massacres of Palestinians. We will stand against those investing in Israeli Arms companies whose profits increase the more bombs are dropped and the more protesters they kill.

Join the emergency protest/ march calling for an end to complicity in Israel’s military regime.

We will meet at Manchester Piccadilly gardens at 1pm!

Together, our voices will and must be heard!