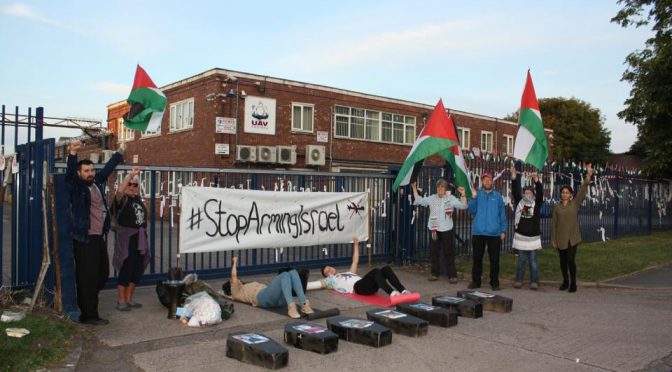 All charges against the last two of the Elbit 5 arrested following the protest in July at the Elbit Systems drone engines factory UAV Engines in Shenstone have been dropped. Charges against the other three were dropped at a court hearing in September.   The court case of the remaining 2 had been timetabled for Friday 24th November to take place at Newcastle-under-Lyme magistrates court. A celebration protest has therefore been called to take place on the same day. If you wish to join the protest  and need transport from Manchester please call 07972365257** or send an email to Adie Mormech <adie_mormech@hotmail.com> as there will be cars going down from Manchester.

The Crown Prosecution Service (CPS) have said “The decision to discontinue these charges has been taken because there is not enough evidence to provide a realistic prospect of conviction”. The  CPS has  dropped the case because Elbit’s management were unwilling to take the stand and be questioned about their company’s activities at the factory.

This is the third time that this has happened. At the height of Israels assault on Gaza in July-August 2014, 9 protesters occupied the roof of the Elbit Systems’s Shenstone factory. The prosecution collapsed in February 2015 when the company refused to provide details of military export licences and details of its trade with Israel.

One year from after Israel’s attacks on Gaza in 2014 , on 6 July 2015, nineteen anti-drone protesters were arrested for protesting outside UAV Engines Ltd, in Shenstone, Staffordshire. In December 2015 all charges against the 19 were again dropped, after the Crown Prosecution Service admitted there was no realistic prospect of conviction.

Now after these three failed prosecutions,  the conduct of the Staffordshire Police and  the CPS in these cases together with the actives of Elbit Systems in the UK need to be subject to public scrutiny.