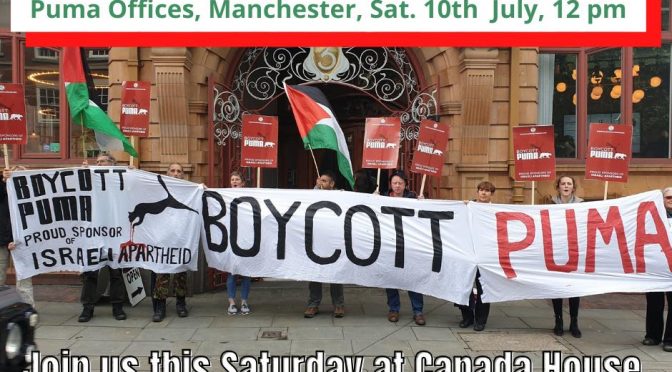 On Saturday 10th July, we will be holding a demonstration outside Puma’s Manchester offices at Canada House, Chepstow Street, Manchester, M1 5FW from 12noon

Puma continues to sponsor the Israel Football Association (IFA). The IFA operates in illegal Israeli settlements on land stolen from Palestinian people. As one of the world’s top athletic brands, Puma’s sponsorship brings international legitimacy to the IFA and helps sustain the infrastructure of illegal Israeli settlements, and Israel’s ongoing dispossession of the Palestinian population.

More than 200 Palestinian sporting teams have called on Puma to end its support of Israeli apartheid by terminating its sponsorship deal, but Puma has so far ignored this plea. Israel is only able to continue its system of apartheid because of the complicity of the international community and major corporations.

Join us and add your voice to support BDS and protest Israeli Apartheid. The protest at Puma’s Manchester offices will be followed by a march to Piccadilly Gardens, demonstrating outside sports shops along the route.